Ask not what a mirror can do for you- 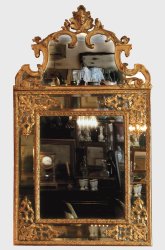 Above are all Louis XIV mirrors. Fascinating period. As transitions go, probably one of the most significant in the history of art. We leave behind the heavy-handedness of everything that came before, including early baroque, and develop and embrace the ultimate in finesse. Lines become precise, surfaces fantastically smooth- the aim is perfection. For the sake of comparison, here’s a good Louis XIII mirror (time immediately preceding Louis XIV) which is at the Met:

Stunning, but there’s a certain clunkiness to it. A rusticity more in line with the art movements of Spain, Italy or Portugal than what France has come to be known for (after Louis XIV.) It’s interesting that in the early pieces (as the 3 first pictures), despite the refinement of execution, we’ve still got a concept that’s fairly unsophisticated. It’s a rectangular frame with a pediment. Not unlike on a classical Greek building. 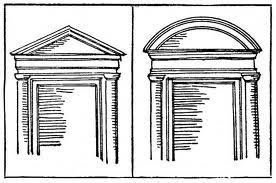 I’ve poured through my references recently because I wanted to get the hall mirror as right as possible. The first thing I decided to do was unmarry the Louis XIV fronton (top section) and the Louis Philippe (1840’s) bottom section (Steve Ruis & Hariod should be pleased to know). I considered just gilding the whole thing, but it would never have been correct. So I embarked on a journey to find a Louis XIV bottom which was missing its fronton. I located one in Barcelona. So on the left you have the not yet divorced version and then the more appropriately married finished product. 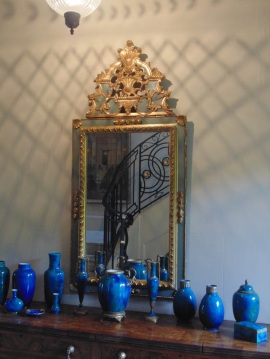 It was worth the trouble because the two parts are really beautifully matched. The gilding matches and after much much paint mixing I got the grey-green  to match as well.

This entry was posted on May 23, 2017 by The Pink Agendist in design and tagged antiques, art, interiors, louis xiv, mirrors, style.