Hiding in plain sight: how the ‘alt-right’ is weaponizing irony to spread fascism | Technology | The Guardian 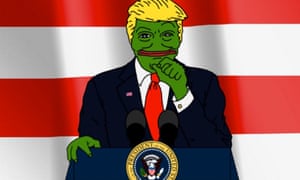 Author Alexander Reid Ross agrees that irony has been deployed by the far right in chipping away at whatever prohibitions have existed around publicly adopting far-right politics. His book, Against the Fascist Creep, published late last year, explores the long history of fascists attempting to mainstream their ideas, or even sell them to the left.

“Fascism is more or less a social taboo. It’s unacceptable in modern society,” Ross says. “Humour or irony is one of the ways that they can put forward their affective positions without having to fall back on any affirmative ideological positions.

Source: Hiding in plain sight: how the ‘alt-right’ is weaponizing irony to spread fascism | Technology | The Guardian

7 comments on “Hiding in plain sight: how the ‘alt-right’ is weaponizing irony to spread fascism | Technology | The Guardian”

This entry was posted on May 24, 2017 by The Pink Agendist in activism and tagged alt right, blogging, breitbart, fascism, politics, psychology of manipulation.