Each with caned seat and back with loose cushions upholstered in red and cream damask. Profoundly French. I’ve always loved sitting at dining tables where everyone gets an armchair. You can sink into your spot as if you never intend to move again. You can see them in detail here. 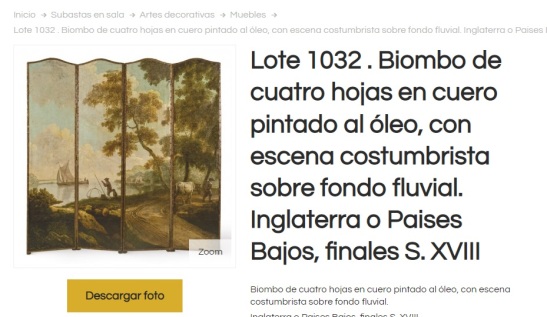 Coming up for sale in Madrid at Segre is this gorgeous waterside scene on a four panel screen. The starting price is three thousand euros. Not a lot for a piece that could completely transform and set the tone for a room. Hung flat on a wall like a painting, screens look divine.

I’ve been looking through screens lately because we came across an exceptional piece which happens to be on a background of my favourite blue. It’s reminiscent of Robert Crowder, but more dramatic. There’s more vibrancy and energy to it.

At the moment we’ve also got a Sottobosco. That’s a sub-genre of Dutch Golden Age paintings. Sotto meaning under and bosco meaning forest. van Schrieck was the master in this world and our example is closely related to his work. It’s been somewhat over-restored in the 19th century, when its frame was added, but is still a very interesting example of the movement. On the floor is a massive German Historismus silver tray. One of the largest of the kind I’ve ever seen. Almost 80cm wide! 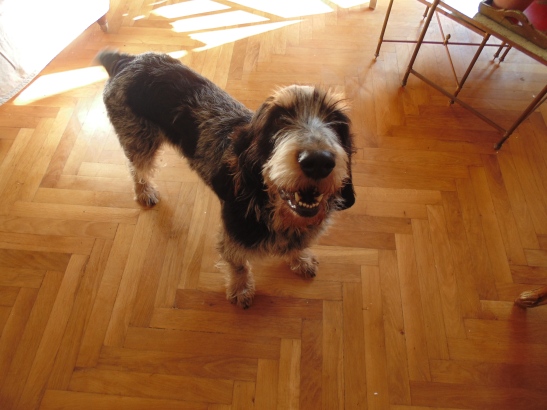 In other news Rémy is doing well. All the reasons he was a shelter dog for so long have become clear. He’s a howler. A noise that’s a cross between a soprano giving birth and whale noises. He also bites. Not anyone randomly, but just me. Well, in the morning he adores me. In the afternoon he’s fine, but when the sun sets he decides he wants to bite me. Obviously, if he were eazy-peazy, he wouldn’t need us, would he? So we’re on a quest to help him through whatever experiences led to these complicated behaviours.

The sun is out in Mazamet, at last!

This entry was posted on February 9, 2022 by The Pink Agendist in art, design and tagged antiques, art, auctions, dogs, furniture, painted screens, pets.