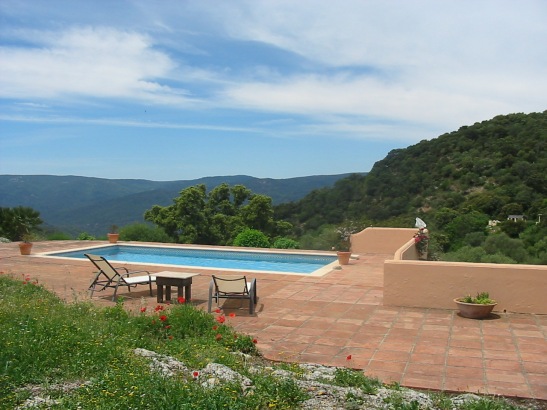 Sarah’s terrace and view in Gaucín 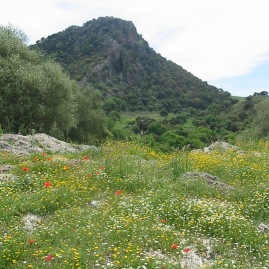 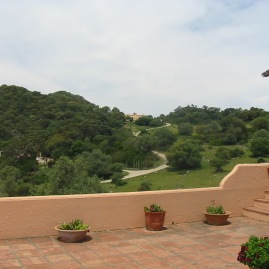 It’s true that the day after you get bad news is a little bit easier. Just a little, though.

Memories have been flashing in my mind all day yesterday and today. I was a mess when I first met Sarah. To be fair, so was she, and so was Mike. We were a merry mess. Those were the days. We drank like fish and smoked like chimneys. In fact the idea drunk driving was a problem hadn’t quite reached Southern Spain (and certainly not us) yet. So we drunkenly drove down her mountains after long lunches and she drunkenly drove away from our coast after long lunches. Long lunches were our thing. And roads were very much empty then as we all lived in splendid isolation.

Sarah was coming out of a relationship that had soured, and Mike and I were (in our first entire year) at war with each other – and the world. But life was fairly simple. The Euro was a novelty and we still counted in pesetas. A three course lunch at the old Venta Garcia (now the modern Venta Garcia) was 2000 pesetas (12 new Euros) and included a little pitcher of Rioja each. We always had more than a pitcher each and lunch always ended with the owner, Jesus, at our table. As in Garcia, not of Nazareth. Although in Spain, you never know, he could also be of Nazareth. Everyone said he had a crush on me. I was cute then, so that was a normal thing. Everyone had a crush on me 😀 I also wore dramatic things like the Hussard jacket by Roberto Cavalli. The only other person I know who had that was Michael Jackson. He gave his to charity. 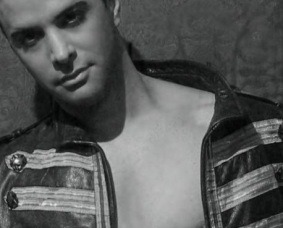 Let’s see, let’s see. What are the highlights?

In later years Sarah told me I was appalling in the early days (meaning my early 20’s). One of my first gifts to her was a cookbook. I thought I was being nice, but apparently giving someone a cookbook with limited calorie diet recipes can be perceived as insulting. I suppose that means our German neighbours must have also been insulted when I gave them Amy Vanderbilt’s Complete Book of Etiquette.

One of my favourite Sarah moments was in a restaurant. A father at a table next to us was really picking on his son of about 9 or 10 years old. This went on and on. By the time our main courses arrived Sarah had had enough. She turned to the boy and said “Your father is a wanker. No one should speak to you this way and everyone here is thinking the same thing as me.” The child let out a little burst of laughter and the father was so shocked he just sat there in silence for the rest of the meal.

Another moment came circa 2009, also at a restaurant. She was already ill and had a little portable oxygen tank – which fell over and made incredible noises. Like a bomb was about to go off. People were starting to stand up and panic. She stood up, put her hands in the air and said “Calm down everyone, I’m English.”

Of course I can’t leave out the big one which was when the financial crash happened. We were heavily invested in real-estate and had poured a ton of money into Villa Trianon expecting Villa l’Africaine would sell and we’d be able to pay our debts… The Spanish property market froze. Our financial investments lost approximately half their value and part of the money used on VT had been a mortgage we took out on VA. Anyway, Sarah invited us to lunch on her terrace and told us she had a six figure amount sitting in a bank account getting very little interest. If we could match that interest, we could have it with no payback date. However long it took was fine. And even if she died before we could pay it back we were simply to make a donation in her name to her theatre which was the Bristol Old Vic.

That was the most amazing thing anyone (apart from Mike) has ever done for me – ever. And we managed the whole thing beautifully. When she wanted a new car we found a way to get her a new car and so forth. Never a moment of awkwardness or distrust.

Anita sent us a gorgeous picture of a young Sarah this morning:

And now back to processing my thoughts.

This entry was posted on August 15, 2018 by The Pink Agendist in thinking aloud and tagged Andalucia, Sarah Porter, spain.