Chris Hayes: What ‘Law and Order’ Means to Trump – The New York Times 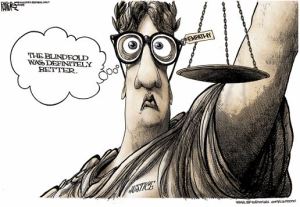 “… In this view, crime is not defined by a specific offense. Crime is defined by who commits it. If a young black man grabs a white woman by the crotch, he’s a thug and deserves to be roughed up by police officers. But if Donald Trump grabs a white woman by the crotch in a nightclub (as he’s accused of doing, and denies), it’s locker-room high jinks.

This view is also expressed by many of the president’s staff members, supporters and prominent allies. During the same week that the White House chief of staff, John Kelly, repeatedly vouched for Rob Porter’s integrity, Mr. Kelly also mused that hundreds of thousands of unauthorized immigrants who did not fill out the paperwork for DACA protections had refused to “get off their asses.”

A political movement that rails against “immigrant crime” while defending alleged abusers and child molesters is one that has stopped pretending to have any universalist aspirations.”

What Mr. Hayes describes is no other than a modern interpretation of society as organised by birthright; what I like to call birthright ideology. That used to mean hierarchical organisation in the aristocratic form. Royals above nobles, nobles above commoners, the bourgeoisie above the working class and so forth. That positioning (also the model of classical patriarchy and backbone of Abrahamic religions) was, shall we say, deterministic. It even dictated whether your word was “true” or not in a court of law. Just ask William Garrow. The Enlightenment and revolutions of the 18th century were supposed to have changed all that, but various sectors of society still operate on those terms – hence Trump’s appeal to the religious despite his actions.

28 comments on “Chris Hayes: What ‘Law and Order’ Means to Trump – The New York Times”

This entry was posted on March 18, 2018 by The Pink Agendist in activism and tagged aristocracy, patriarchy, plato, psychology, religion, sociology.