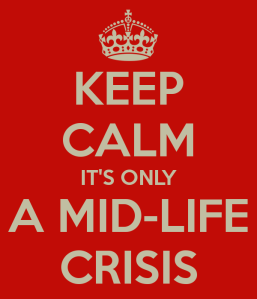 I wake up at night, often, sometimes breathless and panicked. I then look around and I wonder if this is what Should Be. Until a few months ago I still had wake-up confusion. Wondering where I was and why the room seemed so unfamiliar. I suppose that happens if one spent nearly all of their adult life sleeping in the same bedroom. It’s finally over now. I’m settled. At least as (mentally) settled as someone like me can be.

I asked Mike his opinion and he says he thinks my almost 40 is better than his almost 40. He was spending the year in a place called Suzdal filming a mini-series which he didn’t like. It was freezing and the food was awful. If the food is ever bad here, I’ve only got myself to blame.

I keep analysing and re-analysing other people’s lives. How do my decisions compare? What is the average at 40? What should people do, what should they have? But then there’s no such thing as a real average, is there? Goodness knows how many financial articles I’ve read through the years. Invest in this, don’t invest in that. You need to have x amount before retirement. Do this, do that. And so much of it is subjective or pure speculative nonsense.

How did you decide? Did you decide? Or did life just happen? Did you just wake up one day and know, I’ve done it, this is enough. And is that the point at which you go get the DNR tattoo?

80 comments on “Titles are boring”

This entry was posted on January 17, 2018 by The Pink Agendist in thinking aloud, writing and tagged finances, mid life crisis, psychology, turning 40.