We watched Call Me by Your Name today. Undoubtedly the film of the year. It’s only going to be released in France in February, so it was excellent to see it before. I love having/doing things that other people can’t have/do. When I was a boy and my mother would go out in the afternoon and return with treats for my brother and me (pastries or some such,) I’d hide mine and watch him eat his; then about an hour or so later I’d bring mine out and tell him I’d been given two. Because mother liked me more. His horrified expression brought me enormous pleasure. He fell for it every time. I digress. The film is outstanding. The performances superb. One can almost smell Italy in summertime – and fortunately for all I don’t mean Venice. It brought out all sorts of emotions in me, as a good film should.

The second place for me this year is Brad’s Status. The story of a man taking his son to visit colleges – and everything that process triggers in his mind. An examination of his sense of self, his place in the world and his self-worth/perceived value. Very interesting to me personally as another middle aged man trying to figure out what one does once one reaches the middle of the road. I often wake up at night and wonder – have I done it right? Have I made the right decisions? What if I wasn’t meant to be me, and instead I should have been a news anchor in North Korea wearing pretty kimonos?

But of course I don’t get to enthusiastically announce hydrogen bomb tests, rather, I stare at bottles and think yes, or no. No, or yes? It’s the holidays, so I decided moderation can be set aside for the time being. Or perhaps forever. I’m not entirely sure about the concept anyway.

A few days ago I went to see the completed work on apartment 3 (in building I). I’m pleased. As rentals go in that price bracket here, it stacks up very nicely. That’s the last of the apartments that needed work. This means the project is more or less tied up. 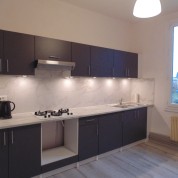 Mike doesn’t want to do the transformation of the atelier.  He says, rightfully, that we need neither more work nor more income. That now we should sit back and relax. Enjoy life a bit.

Mike says the young man in Call Me by Your Name reminded him of young me. I suppose he means an emotionally manipulative know it all. It’s true. I was however more intense. Nearly desperate. Determined to make someone love me. I hadn’t been capable of that as a child, so success was very high on my list of priorities. I’ve only ever managed that trick once, though.

34 comments on “Experimentations in Shallow Breathing”

This entry was posted on December 27, 2017 by The Pink Agendist in art, thinking aloud and tagged art, Call Me by Your Name, culture, films, movies, thinking.