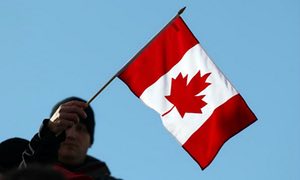 “The piece sparked furore on social media. While some defended Niedzviecki’s idea, others described the piece as clueless and an insult to the indigenous writers who had contributed to the issue. The piece ignored that white, middle-class authors appropriate other cultures too often, said Alicia Elliott, one of the contributors to the issue. “Their voices are lifted up, while the people who are from those cultures are pushed down and kept outside the industry,” she wrote on Twitter.”

May a Blond Chinese Jesus help us all.

For goodness’ sake. The concept of appropriation (as other adventures of North American college students) never ceases to amaze me. In this case they themselves have appropriated the concepts of nativism and xenophobia- apart from denying the human capacity for empathy and understanding. If there’s one thing we should aim for as a society it’s to be able to put ourselves in another’s shoes. My skin does not need to be dark for me to understand the indignity of being relegated to the back of the bus. I needn’t be a woman to acknowledge the horror of stoning or the insult it is to earn 75 cents on the dollar.

The idea we, humans, we who laugh and cry at the same times during films, whose eyes water on queue to lyrics, can and should only communicate experiences based on our born identities is the ultimate in imbecility. It is the appropriation of sexism, of racism, of homophobia and all the other things many of us reject because we know better. And if you don’t know better yet, you should.

This entry was posted on May 13, 2017 by The Pink Agendist in activism and tagged appropriation, equality, feminism, homophobia, racism.