We left Spain 2 years ago today. What you see above is my last bloody mary at the marina. I loved the marina in winter, barely a tourist in sight. I was 36- and had no idea of where we’d end up. We had a list of five houses, all completely different from each other. From Parisian suburbs to Burgundy to (Northern) Aquitaine to the Basque Country… and Mazamet. I think we ended up in the right spot.

Next week we’re invited to the Christmas charity party at La Villa de Mazamet. The owners shocked us by announcing they’re putting the place on the market:

Their plan was to build up the hotel’s reputation in their 40’s, then sell it and downsize in their 50’s (by the sea, near their families.) That time has come. I imagine they’ll sell easily as the place is wildly successful. They’ve won all sorts of awards. I’ve never had a ten year plan- just a sort of general outline of life. I don’t like the idea of things changing every ten years. In fact I don’t like the idea of things changing at all. There’s no way anyone’s ever getting me to move again. Ever.

I found (and bought) an old book about Mazamet. Lots of pictures and the town’s history. Fascinating. Hautpoul is taken in 1212 by the Baron of Montfort in the Albigensian crusade. After the destruction people decide to come down the hill and resettle on the banks of the river. And that’s how Mazamet is born. More precisely Hautpoul-Mazamet as it was called at first. The 1337-1437 war with the English ravages the town. So much so Charles V orders the building of ramparts and pits. In 1517 the Mazamétains ask King François I for the establishment of a weekly market and three fairs per year (St. Martin, St. Mathias and Pentecost.) The requests are granted. The town suffers terribly in the wars of religion. The Duke of Rohan, head of the protestants, has 800 soldiers here; that leads the Prince of Condé to demolish the ramparts, set fire to homes and pillage Mazamet in 1628. The town gets its first official doctor in 1741. The main street (now named Édouard Barbey) is paved in 1762. In 1790 the population is 5,474. In 1792 the owner of the property across the street from number 42 is guillotined by the revolutionaries in Toulouse. In 1830 the inhabitants of Labrespy rise up against the inhabitants of Mazamet because of the confiscation of ham. Four people are killed and many injured in the clash. This is Occitania, ham is a serious matter. In the 1850’s Napoleon’s Marshal Soult (who was from this area) commissions local companies to make the fabric for military uniforms. There’s an economic boom. The population is now 12,000. By 1875 Mazamet is the wool capital of the world. Some of the biggest fortunes in Europe are Mazamet residents. In the 1870 war Baron Reille, representative for the region, takes his brigade to participate in the defence of Paris. 1909 sees the great strikes of Mazamet which lead to collective bargaining rights. And the first world war sees the town lose 453 men. A monument is erected in their memory in the park. It’s still there today. 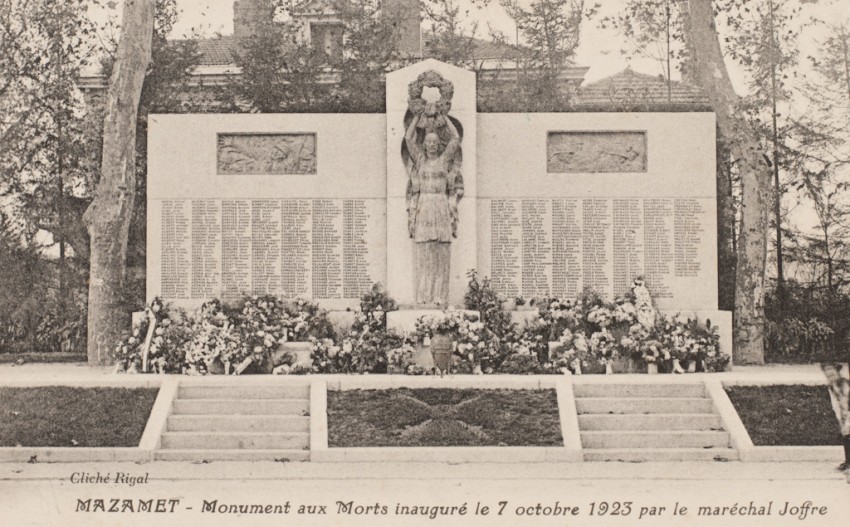 This entry was posted on December 9, 2016 by The Pink Agendist in Mazamet and tagged history, La Villa de Mazamet, Mazamet, religion, War.