Last night we watched Gett: The Trial of Viviane Amsalem. Everything about it is superb. Watch the trailer because it gives a very good idea of how the film plays out. It’s the Jewish answer to Asghar Farhadi’s A Separation. The Catholic version hasn’t come out yet- because obviously, divorce doesn’t exist in Catholicism. I suppose one day they might try to make a very tedious film on someone trying to get a Declaration of Nullity, who knows?

Watching it made me think of how we see everything through our own lens- which in turn reminded me of Horace Miner’s brilliant 1956 work on The Body Rituals of the Nacirema. It should be required reading the world over. It opens the reader’s eyes in a way few short essays could. It certainly changed how I saw the world when I read it many, many years ago. That’s because we all, without exception, take what’s familiar for granted. In that sense Miner’s work is really just the tip of the iceberg. I could describe to you a Sub-Saharan African tribal practice that actually institutionalises misogyny. 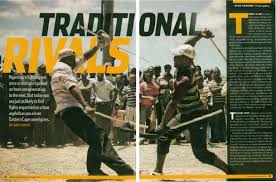 While the men engage in a brutal physical competition which often leaves them hurt (sometimes for life), the women are divided into two separate groups, one supporting each of the competitors. They’re expected to chant and do dances that on occasion even resemble sex acts. During this process it’s required these young women be scantily clad, further enforcing their servile role in the tribal structure. The more troubling aspect of these customs regards age. Very young teens are encouraged, one could even say indoctrinated, into embracing their own socio-cultural subservience by taking part in this activity. This means we’re talking about a “civilisation” that is irredeemably inferior to our own and incompatible with our values. Unless I tell you I’m not describing Sub-Saharan Africa, but Texas. And the brutal competition is football; and the scantily clad women are cheerleaders. How does it all look now? I can see you smiling there in the corner, Makagutu!

One comment on “Viviane Amsalem & Body Ritual Among the Nacirema”

This entry was posted on November 30, 2016 by The Pink Agendist in activism and tagged anthropology, atheism, discrimination, perspective bias, sociology, Viviane Amsalem.