How Trolls Are Ruining the Internet | TIME 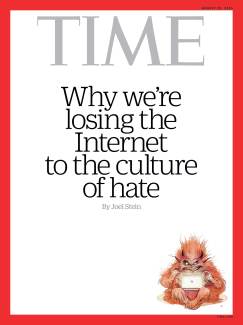 Fantastic article at Time: “But trolling has become the main tool of the alt-right, an Internet-grown reactionary movement that works for men’s rights and against immigration and may have used the computer from Weird Science to fabricate Donald Trump. Not only does Trump share their attitudes, but he’s got mad trolling skills: he doxxed Republican primary opponent Senator Lindsey Graham by giving out his cell-phone number on TV and indirectly got his Twitter followers to attack GOP political strategist Cheri Jacobus so severely that her lawyers sent him a cease-and-desist order.”

For full text click here: How Trolls Are Ruining the Internet | TIME

42 comments on “How Trolls Are Ruining the Internet | TIME”

This entry was posted on September 11, 2016 by The Pink Agendist in activism and tagged feminism, hate speech, lgbt, social media, trolls.