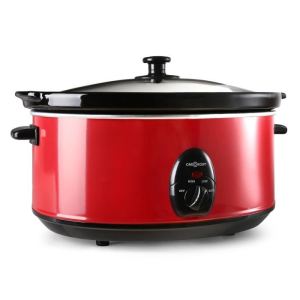 I finally got one. It should be delivered today. What convinced me was a dish at one of the Christmas parties we went to- and the way the hostess described just putting everything in the pot and then letting it cook for eight hours. Never lifting the lid, no poking or prodding. As I cook every day, sometimes twice a day, like a 1950’s suburban housewife, the concept is terribly appealing. Now I’m looking for ideas of what to actually make in it which is light and low cholesterol (because of Mike, who btw now has excellent cholesterol with no pills, just a change in diet.) Any ideas?

44 comments on “Slow cooker, anyone?”

This entry was posted on January 6, 2016 by The Pink Agendist in life and tagged crockpot, food, recipes, slow cooker.