A ton has been done already. Walls have been stripped, then insulated, then covered in plasterboard. And the walls that had to be moved have been moved. I don’t have pictures of the after yet, but here’s the during in the garden-side one bedroom (middle level). 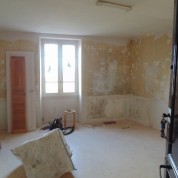 We want to get it done asap because the tenant we inherited is currently living in the street side one bedroom which is really not fit for purpose- so we want to move him across the hall into this one before the cold arrives. The views are acceptable.

After the three apartments on the middle level are done, we’re moving to the floor above which has just two larger apartments. They’re in pretty decent condition, so the work inside the apartments is mostly aesthetic. The outer walls do need to be insulated as does the attic space, but that’s just a couple of days of work.

We’ve chosen all of the tiles for bathrooms and kitchens. They’re from a Spanish company called Grupo Halcón, price/quality, they’re best on the European market by far. They’ve developed some really fantastic techniques, one of which is making a machine made tile look hand painted. Plus, as the Spanish border is only two and a half hours away, delivery charges are reasonable.

This next week I’m going to start doodling ideas for the ground floor garden flat (street side is a studio, the entrance hall and two small storage rooms). It’s currently just a big empty space that opens up to a little abandoned walled garden.

Built area is approx. 125m2. The garden is 300m2. The ceilings are a good height, around 3.6 metres. My instinct is to make it into a loft-style space. No walls except for the bathroom. Big glass doors facing the garden. A town-centre property with a garden isn’t easy to find around here- so I’ve been considering doing it up as a luxury flat (to sell rather than being just another rental in the building. It would have it’s own private entrance from the street.) That would boost our property investment kitty.

I mentioned the idea to Mike and his eyes widened with horror. He wants a peaceful, relaxed lifestyle from now on. That played a big role in our decision to leave Spain (rather than build another house there.) I’m reasonable, though. I’m willing to set a limit. We’ve already agreed I can do one more project/building of three to five flats. So I just want to do one more after that of another 3 to 5 flats. So I’ll propose an absolute total number of 20 individual properties. At the moment we’ve got 11, so that still leaves me 9 to find, buy and do up 🙂 That’ll keep me busy for two years, and then I turn 40, and at that point I’ll stop and work exclusively in fine arts and at home.

This entry was posted on November 21, 2015 by The Pink Agendist in life and tagged architecture, interior design, real-estate.