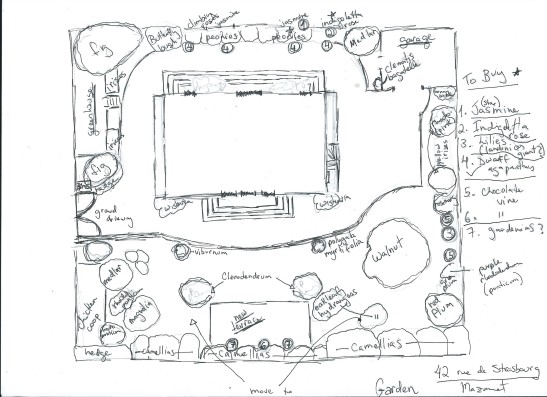 So here’s a quick sketch of the garden, almost to scale (almost because the house is actually equidistant from the side walls, which means I drew the greenhouse too small.) We’re keeping all the existing trees, shrubs, bushes etc. There are a few plants (not drawn out or labelled) I didn’t know that I thought were decorative but yesterday Olivier (the gardener) told us they’re actually weeds that must be removed as soon as possible. He’ll do that next week.

Apart from what’s in the drawing, there will also be two beds on either side of the steps that face the garden. There’s very little to buy plantwise. All we’re introducing are the plants where there are numbers on the sketch. And we also haven’t decided what goes in the beds by the steps. I do know I want something tall and thin and then something midsized and evergreen around it (preferably flowering.) The gardener says there’s no risk from roots causing damage to the house because of the basement.

Later in the year, or maybe next year, I’ll do some proper drawings of the garden and start a proper book as well. I was also thinking of maybe getting someone to do botanical drawings of everything there is in the garden, and then distribute them through the bathrooms of the entire house. That could be amusing

17 comments on “The Garden”

This entry was posted on September 2, 2015 by The Pink Agendist in Uncategorized and tagged france, gardens, landscaping, Mazamet.