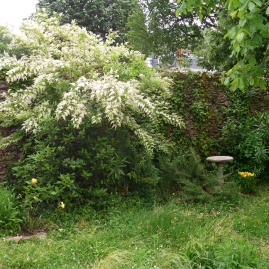 I’m doing my best to restrain my urge to fiddle with the garden- well, I’m trying to learn everything I can about English style planting as quickly as I can first.

Meanwhile, I’ve been removing dead branches and doing some mild pruning. I’ve also been identifying bald spots where plants have died. I’ve bought some replacement plants. Landini lilies to go with the yellow lilies by the birdbath. Polygala myrtifolia, which is a South-African shrub, and some lavande de Grasse. I also got a pair of lemon trees to keep in pots on the steps.

I was walking through the garden yesterday and looking at the flowers, when  I suddenly realized they were the same flowers as the wallpaper in the small salon/study. Lilies, peonies, purple anemones. The only one missing from the garden are blue tulips, but I’ll plant some in fall to correct that.

Purple/blue seems to be the dominating colour, led by the wisteria. I’m obviously respecting that and buying plants in the same palette.

The weather has been amazing in the past few days. Warm, but not it’s too hot to breathe warm.

Mike invited the elderly woman who lives across the street for tea. She’s from Paris but has lived here for thirty years. Charming. She gave us an outline of life on the street; including listing the neighbours who helped her when she broke her arm last year. In her words, here we all help each other. Nice.

This entry was posted on June 1, 2015 by The Pink Agendist in Mazamet and tagged flowers, france, gardens, Mazamet.